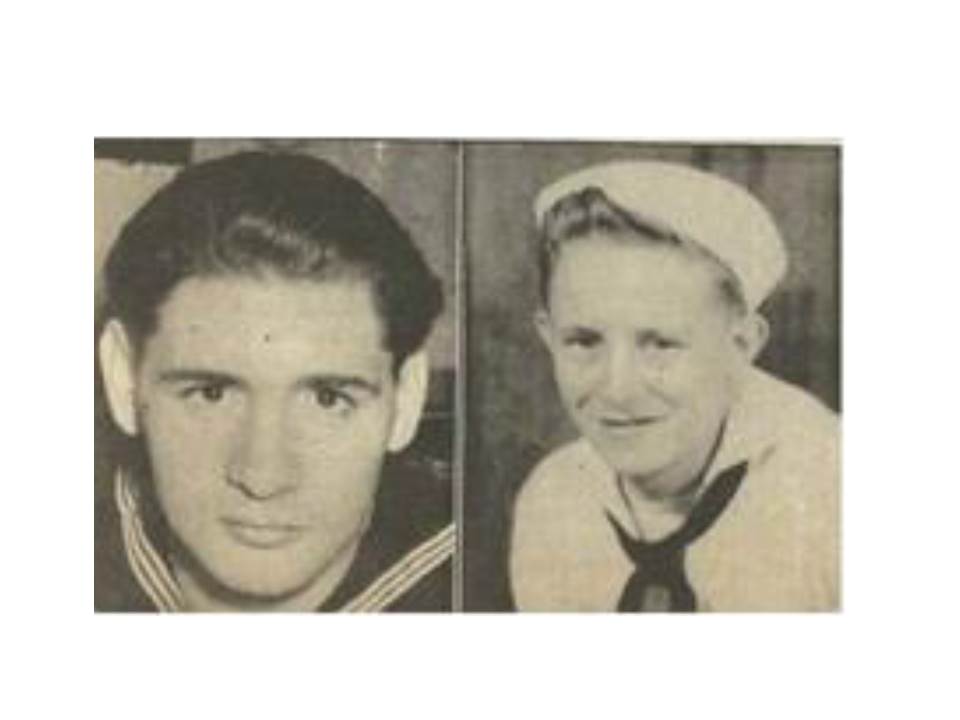 When George Hamann (right) of Menomonee Falls, Wisconsin, was drafted into the Navy in 1943, he wasn’t certain of where he was going, but he didn’t think it would be Farragut, Idaho. Eventually, George was trained to be a store keeper at the Bremerton, Washington Navy Yard, and assigned to the U.S.S. Enterprise.

Donald Lardie (left) of West Allis, Wisconsin, enlisted in the Navy in 1943 and was trained in Fire Control Service at the Great Lakes Naval Training Base. After he learned to control the firing of guns like those on the Enterprise, he was sent to Seattle to board the ship herself in September 1943. Donald’s sea-going rating was Fire Control Seaman 1/C and he was one of the Enterprise gunners who manned the 20mm and 40mm guns. “Over all, I traveled about 196,000 miles on water, and after the first few weeks adjustment period, I never got seasick,” he remembered.

George has a briefcase bulging with information about his Enterprise stint and can answer questions about her almost at the drop of a salute. Donald has a “Life Magazine” article and several other stories about the Enterprise and his time aboard her. She is part of their lives still.

The U.S.S. Enterprise began her own life story with her October 3, 1936 launching. She was built at a reported cost of about $25,000,000, with the space for more than 100 aircraft. On December 7, 1941, she was sailing the open sea on the way to Pearl Harbor. The Japanese considered her a prime target, but they did not bomb her the way they did so many battleships tied up at Pearl Harbor. Less than two months after Pearl Harbor, the Enterprise spearheaded the task force under Admiral William F. Halsey which smashed the Japanese bases in the Marshall and Gilbert Islands. This was the first U.S. offensive thrust after Pearl Harbor. She participated in attacks on Marcus and Wake Islands and provided patrols and fighter protection for the U.S.S. Hornet when it participated in the bombing of Tokyo. The Enterprise fought at the Battle of Midway, was struck by three bombs in the Battle of Stewart Island on August 24, 1942, and suffered bomb hits and casualties in the battle of Santa Cruz. Planes from the Enterprise wiped out a fleet of twenty Japanese transports and possibly 200,000 soldiers aboard them in the Battle of Guadalcanal. On January 29, 1943, it destroyed twelve of thirteen Japanese torpedo planes which had sunk the U.S.S. Chicago.

According to the Navy, the Enterprise was the first carrier to strike offensively at the enemy and throughout her career she damaged the Japanese at an estimated eight to ten times of her original cost. She absorbed terrific punishment, refuting the notion that “flat tops were hopelessly vulnerable.” The Enterprise was commanded from March to July 1942 by Captain George Murray of Washington; from July to November 1942 by Captain Arthur C. Davis of Worcester, Massachusetts; and from November 1942 to April 1943 by Captain Osborne B. Hardison of Wadesboro, North Carolina. The commanding officer in the summer of 1943 when George Hamann came aboard the Enterprise was Captain S.P. Ginder of Altoona, Pennsylvania.

During the time George Hamann served on the Enterprise from August 1943 until June 1945, it participated in the Bonin Island, Formosa, and Philippine island raids. The Enterprise fought in the French Indo-Chinese Theater, and on January 16, 1944, participated in the battle for Hong Kong-Canton. George recalls this vividly. “We were so close to this one we could see the planes dropping bombs on Canton.” During the time he served on the Enterprise, George remembers about 150 general quarters alerts which meant that every man had to report to his battle station. Many battles did take place because from December 24, 1944 to May 31, 1945, the Enterprise operated as a specialized carrier. It supported the Luzon Landings, strikes at Okinawa, Tokyo, Iwo Jima, Kyushu, and Kaito-Gunto, and made a total of 1,022 night sorties.

Both George Hamann and Donald Lardie recall that their battle gear was dark blue dungarees, blue dungaree shirts, and royal blue caps. Their clothing was flash proof in case of fire, and everyone wore life preservers all of the time.
“She was the most decorated ship in the war,” George says proudly.

The statistics bear out his statement. The U.S.S. Enterprise earned 20 out of 22 possible Pacific battle stars, knocked down 911 Japanese aircraft, sank 71 enemy ships, and damaged 192 enemy ships. She was damaged 15 times by enemy actions- more than any other carrier – and six times the Japanese optimistically announced that they had sunk her.

Donald and George were both aboard the Enterprise on May 14, 1945, when shortly after dawn she took a hit through the forward elevator into the interior of the ship from a perfectly placed kamikaze plane. The Enterprise was off Kyushu, the southernmost of the Japanese home islands. The kamikaze bore down on the Enterprise despite a hail of anti-aircraft fire. It struck and its delayed action bomb crashed through the elevator deck and the deck below, landing in compartment 305-A before exploding. The concussion threw one large section of the elevator at least 400 feet in the air and exploded the flight deck for 116 feet. But despite the damage done to her, the Enterprise was still lucky. Compartment 305-A was loaded with rags and toilet paper, two things perfect for absorbing the downward and horizontal thrust of the explosion. Crews had put out the fires within half an hour. George and Donald express the pride the men assigned to her felt. This pride was reflected in most of the activities on board, including sporting events, gunnery, engineering, aviation, and ship handling.

When Enterprise sailors went ashore, they vigorously defended their reputation of being the best ship afloat in local bars and with other service personnel. “I’m not sorry I served aboard her. It was for a good cause and I’d do it all over again if I had to,” George says

Donald stayed with the Enterprise after VJ-Day and sailed on her last voyage which was to rescue a Liberty Ship which had broken up off the Azores Islands. The Enterprise picked up sailors and WAVES in January 1946. At the end of the war the Enterprise wore her battle scars proudly. She had very few compartments above the fourth deck level that had not been damaged. Many of her pipe lines had temporary patches of sheet rubber with a sheet metal clamp over it to stop a leak. Temporary electrical connections were twisted wires covered with black electrical friction tape. There were many scars, shrapnel holes, and temporary structures throughout the ship. In 1945 one bomb exploded below the No. 3 propeller with the effect of a depth charge, causing considerable damage to engineering spaces. She was badly scarred and worn after nine years of arduous service to her country. Eventually the Enterprise could not perform and compete with the newer ships and aircraft. She was decommissioned and in 1959, she was scrapped.

​Donald Lardie’s epitaph for her speaks for the thousands of men who served on the U.S.S. Enterprise. “She was so big she was a city in herself. I had some good times on her and some scary times, and I hated to see her scrapped.”