To Beard Or Not to Beard - That is the Historical Question 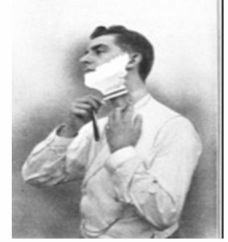 Razors at the ready, every year beard contestants at  West Virginia University first shave their chins to insure beardlessness and then three weeks later bushy bearded contestants shave off the results of its annual Beard Growing Competition as part of it Mountaineer Week. The Beard Growing Competition has been one of the most popular Mountaineer Week activities at West Virginia University since it started in 1949.

The Historical Heritage of the Beard

Beards have sprouted and been shaved cyclically in history and beards have enjoyed a mixed reception in various historic eras. Pictures of the priests and fathers of the early Christian era show long flowing beards that custom said added gravity and sanctity to the aspect of the bearded. Not all men wore beards, however. Some men thought the long, flowing beards might hide the contemptuous curl of lip and it would be dishonest to let their beards grow.

The Roman and Greek churches eventually disputed the issue of to beard or not to beard. The Roman Church had a set of statues regulating the size of the beard and the shaving of the face. It was customary to consecrate the first clippings from the chin to God. The Greeks on the other hand felt that Romans without beards boarded on blasphemy and Greeks with beards indicated extreme sanctity. St. Nicholas, the basis for the modern Santa Claus, had a healthy beard.

A smooth chin was the mode during the reign of Louis XIII of France, but Louis XIII himself sported a goatee. King Henry VIII of England enjoyed a beard.   Players on both sides of the Civil War including John Brown, Abraham Lincoln, and William Tecumseh Sherman sported beards.

To fit in. “I’m doing a film now with a lot of guys as well, so at the end of that I will be growing a beard.”
Keira Knightley

To Declare Your Youth or Manhood. “He that hath a beard is more than a youth, and he that hath no beard is less than a man.”
William Shakespeare

To provide a challenge. “Kissing a man with a beard is a lot like going to a picnic. You don’t mind going through a little bush to get there!”
Minnie Pearl

To accentuate your personality. “His droll little mouth was drawn up like
a bow, and the beard of his chin was as white as the snow.”
Clement Clarke Moore

To inspire poets and your inner poet .  “Not for a moment, beautiful aged Walt Whitman, have I failed to see your beard full of butterflies.”
Federico Garcia Lorca

To Inspire Future Businesses. “One day soon the Gillette company will announce the development of a razor that, thanks to a computer microchip, can actually travel ahead in time and shave beard hairs that don’t even exist yet”
Dave Barry

To Compete with Other Men. “I had the only beard in the Western Hemisphere that made Bob Dylan’s look good.
“ Bill Walton

To Please Your Lady Friend.  Sometimes she admires your beard more than she does you and she vows that your beard is of great traditional and historical significance.

Brothers of the Shaving Brush and Close Relatives of the Razor

Society always has its rebels and beard favoring societies produced a small, rebellious sect that fiercely believed that beards should be at least well groomed, and at best, shaven.Frenchman Jean Jacques Perret invented the first safety razor in the late 18th century. As an expert on the subject, he also wrote a book
called Pogonotomy or the Art of Learning to Shave Oneself.

King Camp Gillette invented the Gillette safety razor, with his innovation from other safety razors being the thin, inexpensive disposable blade of stamped steel. During World War I, he made a deal with the American Armed Forces to provide every enlisted man or officer on the way to Europe with safety razors and blades. Gillette’s deal put more than 3.5 million razors and 32 million blades were put into the hands of young men and assured a market for generations to come.

The No Beard Side of the Story

Monday, October 18 of every year is No Beard Day. Modern streamlined razor blades meant that more beards needed to be shaved than grown, and anonymous shavers created a special day to shave beards.

There is no official presidential proclamation to advertise Monday, October 18, 2011, as No Beard Day, but it always occurs on October 18 and the public celebrates the holiday in an informal fashion. No Beard Day gives bearded men and perhaps a few women the opportunity to enjoy a smooth shave, taking advantage of the modern razor technology and aromatic after shave lotions. It is a day when a diehard beard bearer can take the risk of allowing family and friends to see what they really look like underneath all of the facial hair. No Beard Day can be a day of surprises, rejections, and renewal.

Until the early twentieth century a straight razor, a razor with a blade that can fold into its handle, played a major role on the shaving stage. Barbers used straight razors, also called open razors and cut throat razors, to shave their customers and in their shops. Straight razors require much skill to hone and strop, and require more focus and attention during shaving. Straight Razor care once comprised a major part of the barber college curriculum.

A safety razor, a razor that protects the skin from all but the very edge of the blade,
eliminated the possibility of the shaver cutting himself with the blade. The safety razor incorporates a disposable blade. Englishmen in Sheffield, England, made a similar safety razor in the late 1820s and shavers in Britain and Germany used a single edge blade mounted on a hoe shaped handle from the 1870s into the twentieth century. Kampfe Brothers patented the first American safety razor in 1888 and it featured a wire skin guard along the edge of the razor.

Since the 1950s, a variety of electric razors have provided a popular alternative to straight and safety razors. Despite electric razor technology, straight razors still garner a share of the market. Electric razors and eclectic and exotic after shave lotions like Old Spice and Brut have made shaving beards a science and an art.

Eight Quoted Reasons Not To Grow a Beard

To Reassure people that you aren’t smarter than they are. ” I have the terrible feeling that, because I am wearing a white beard and am sitting in the back of the theatre, you expect me to tell you the truth about something. These are the cheap seats, not Mount Sinai.”
Orson Welles

To Confuse People. If you grow a beard in October, you are going against the norm. Normally, people shave their beards in spring to get ready for the warm weather and grown them again in fall to warm their faces through the winter.

To Gain Wisdom.  “Wisdom is in the head and not in the beard.”
Swedish Proverb

To Save Your Marriage. I could not endure a husband with a beard on his face. I
would rather lie in the woolen.”
William Shakespeare

To Prevent Goats from Preaching. “If the beard were all, goats could preach! “
Danish Proverb.

To remind humans of their humanity. “The eyes of fire, the nostrils of air, the
mouth of war, the beard of earth.”
William Blake.

To Please Your Lady Friend. She refuses to admit that your beard is traditional and of historical significance.