Philip Paul Bliss and His Trunk of Songs 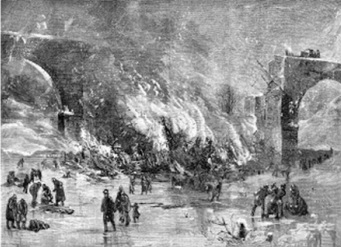 The night of December 29, 1876, Philip Paul Bliss and his wife LucyYoung Bliss were aboard Pacific Express Train No. 5, which chugged westward over the Lake Shore & Michigan Southern Railway on the way to Chicago. They had left their two young sons, George, 4, and Philip,1,with Philip’s mother and sister in Rome, Pennsylvania, and were traveling back to their home in Chicago.

Philip Paul Bliss had written the words to a new song and placed the song sheet in one of his trunks that rode in the baggage car of the train.

As he sat beside Lucy on the train seat, staring out into the swirling snowflakes, perhaps Philip thought about the journey had brought him and Lucy to this train ride. He was born in a log cabin in Clearfield County, Pennsylvania, in 1838. His father Isaac, a practicing Methodist, taught him to love music and develop his passion for singing. His mother taught him from the Bible, and he had little formal schooling. Philip left home at age 11 to make his own living and worked in timber camps and sawmills.

Philip managed to get an education and earned his teaching certificate in New York. In 1857, he met J.G. Towner who taught singing and Towner gave Philip his first formal voice training. He eventually became a music teacher and sold his first musical composition for the flute. In 1858, he accepted an appointment at Rome Academy, in Rome, Pennsylvania. While he worked in Rome, Philip met Lucy J. Young who also came from a musical family and they were married on June 1, 1859.

The Blisses moved to Chicago in 1864, and Philip became known as a singer and teacher. From 1865-1873, he worked with the Root and Cady Musical Publishers, conducting musical conventions, singing schools and concerts. He continued to compose hymns.

Over the years, Philip wrote both words and music to hymns like Almost Persuaded, Dare to Be a Daniel, Halleluhah ‘Tis done!, Hallelujah, What a Saviour!, Hold the Fort, Jesus Loves Even Me, Let the Lower Lights Be Burning, Once for All, The Light of the World Is Jesus, Whosoever Will,and Wonderful Words of Life. He wrote the words for My Redeemer and wrote only the music for I Gave My Life for Thee, It Is Well With My Soul, and Precious Promise.

In 1869 Philip met Dwight L. Moody and Moody and others urged him to give up his job and become a missionary singer. In 1874, Philip became a full time evangelist and Lucy often accompanied him on tours and rallies. In December 1876, the Bliss family spent the Christmas holidays with Philip’s mother and sister in Pennsylvania, planning to return to Chicago in January. A telegram arrived in December asking him to return sooner to take part in meetings the Sunday after Christmas. He wired Moody a message: “Tickets for Chicago, via Buffalo and Lake Shore Railroad. Baggage checked through. Shall be in Chicago Friday night. God bless you forever.”

Philip stared out the window. Chicago still lay 350 miles down the track. So far the train trip had been a stormy one. A blizzard had raged all day and piled huge drifts of snow along and across the track. A cold, biting wind blew about forty miles an hour and the inky darkness of the night pressed against the train windows like a velvet cloak.

The Railroad Trestle Bridge over the Ashtabula River Collapses

The train approached the bridge on the south track. Suddenly, the bridge gave away and one engine, taking a sudden leap forward, rested safely on the western bridge abutment. The other engine, two express cars, and part of the baggage car stood with their weight on the bridge.

The rest of the train fell into the ravine 70 feet below. Lanterns, stoves, wooden cars and fierce winds combined to create a devastating fire storm. Philip escaped through the car window, but Lucy was caught in the ironwork of the seats and he struggled to free her. When Philip couldn’t free Lucy, he stayed with her and they died together. Their bodies were never found. Of the 160 passengers, 92 died in the accident which came to be known as the Ashtabula River Railroad Disaster.

Philip’s trunk which somehow had survived the blaze reached Chicago safely. It contained many hymn-poems that he had not yet put to music. Inside of it were the lyrics for a gospel song. James McGranahan, a nineteenth century American musician and composer, wrote a tune for the song and Thomas Alva Edison chose it as one of the first songs he recorded. The song is “I Will Sing of My Redeemer.”

Memorial services were held all over America for Lucy and Philip Paul Bliss. Their funeral service was held in Rome, Pennsylvania and today a memorial museum is located there.