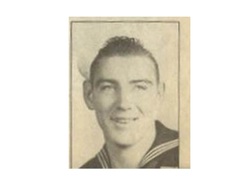 Stan Valentine of Kenosha enlisted in the Navy when he was only 17 years old, because he wanted “to see some action and to see the world.”  His adventures began and ended at Pearl Harbor, with many ports in between.

Beginning in February 1941, Stan received his training as a machinist mate at Great Lakes Naval Training Base. By August he was tending the fires in the boilers on the U.S.S. Whitney, a destroyer-tender moored about 300 yards from the U.S.S. Arizona at Pearl Harbor, Hawaii.

Sunday, December 7, 1941, began like any other Sunday morning for Stan. He recalls that Reveille sounded at 6 a.m. as usual.  Just as he was finishing breakfast, he heard the sounds of planes and machine gun fire. “This is a hell of a way to have a practice,” Stan remembers thinking.

Then the General Quarters alarm sounded and everyone ran to their battle stations. “We took turns going up on deck to see what was happening.  I saw machine gun bullets and planes with the rising sun on their wings,” Stan says.

He described an inferno of smoke, flames, and damaged ships. The Arizona was a pillar of smoke as high as the eye could see and the fires still burned fiercely all that night. The entire harbor was in a state of confusion and alarm. By the time the attack was over, the Japanese had temporarily disabled every battleship and most of the aircraft in the area of Hawaii.

A total of five battleships, three destroyers, the mine layer Oglala, and the Utah were damaged too severely to be of any further use. Three battleships – the Pennsylvania, Maryland and Tennessee- three cruisers, the Helena, Honolulu and Raleigh; the seaplane tender Curtiss and the repair ship Vestal were damaged. The Japanese destroyed 80 naval aircraft and 97 army planes on Hickam and Wheeler Fields, but the most serious losses were in the officers and enlisted men of the Navy, Marine Corps and Army. The total of killed, wounded, and missing at Pearl Harbor came to 4,575.

The approximately two hour Japanese attack “seemed like all day” to Stan, but luckily the U.S.S. Whitney was not damaged.

Stan’s next tour of duty was on the U.S.S. Chevalier DU-454 until May 1943, when he decided to attend submarine school in New London, Connecticut. This turned out to be a fortuitous decision for Stan, because the Japanese torpedoed the Chevalier on October 6, 1943. At submarine school, Stan learned how to repair submarine engines and graduated as chief motor machinists mate. He was shipped back to Pearl Harbor to do repair work as part of a relief crew on submarines.

Next, the Navy assigned Stan to serve on a submarine, the U.S.S. Hoe, a standard “fleet” submarine about 308 feet long and comparable in size to a destroyer. The Hoe joined the Pacific Submarine fleet in the spring of 1943, and her first six water patrols were all made in the Southwest Pacific near the Philippines and off the China Coast.

The crew on the Hoe consisted of 70 men and eight officers, first under the command of Commander V.B. McCrea and then Lieutenant Commander Miles P. Refo III.  Lieutenant Refo headed the Hoe’s last two war patrols and was awarded the Legion of Merit for sinking an enemy destroyer.

During her tour of duty, the Hoe sank a total of 60,300 tons of Japanese shipping and damaged another 59,400 tons. She was just entering Guam on her way to Japan after a navy yard overhaul when the war ended. The Hoe’s next stop was still Japan, where Stan enjoyed the distinction of being one of the few Pearl Harbor survivors at Tokyo Bay attending the surrender ceremonies. “In a way I felt very sorry for them,” he says.

One of Stan’s last official Navy duties was serving on the crew that brought a Japanese submarine back to the United States. The Japanese crew was still present and he and the other American sailors learned enough Japanese to navigate the submarine. He remembers that its workmanship was poor and it was not as modern as American submarines. The American crew brought the Japanese submarine to Guam and back to Pearl Harbor.

Stan was discharged from the Navy on February 3, 1947, and went to work for American Motors in Kenosha, Wisconsin. He was called back to active duty during the Korean War and went to submarine repair school at San Diego.

He has been able to lead a full life in spite of his war experiences, but Stan does make one wry comment. “I would never buy a Japanese car.”