Words and Remembrance:  May 1970- Kent State in Ohio and Jackson State in Mississippi 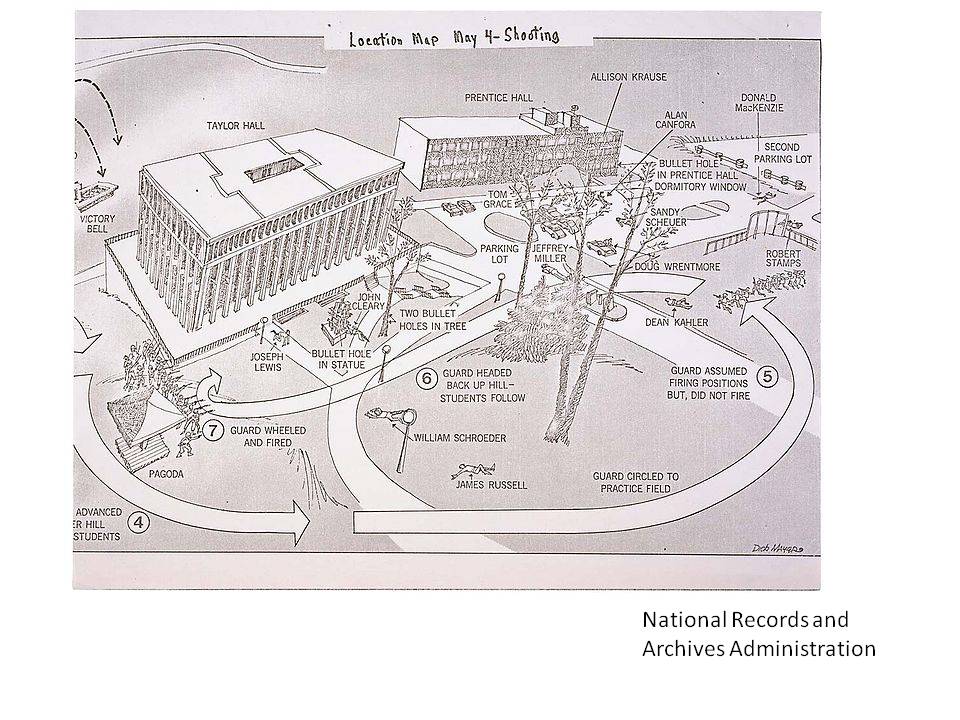 The participants in Kent and Jackson State, past and present, are remembered. At the dedication  of the granite memorial at Kent State University on May 4, 1990, people planted a daffodil for every American killed in Vietnam- at least 47,355 daffodils. A shirt belonging to a student with a bullet hole through the back and spent M1 shell casings are included in one May 4 archive. By the later 1990s, a Kent State parking lot featured four spaces marked off with light posts to commemorate where the four students died.

Spring came violently to college campuses in May 1970. College campuses across the country seethed with demonstrations and protests in May 1970. The issues included the escalation of the war in Vietnam and the United States invasion of Cambodia, the environment, racism, repression, and the exclusion of the experiences of women and minorities from higher education and history textbooks. Academic America and the rest of the country were constantly challenged with confrontations and calls for change.

The day before the shootings, May 3, 1970, Ohio Governor James Rhodes, added his words to the situation. Governor Rhodes  who was a candidate for the U.S. Senate, said that antiwar students were: “worse than the Brownshirts and the Communist element and also the night riders and vigilantes. They are the worst type of people that we harbor in America.”

After the Ohio National Guard opened fired on the students, Kent State geology professor Glenn Frank and other faculty marshals begged the angry, traumatized students to leave before the Guard fired again.  Professor Frank said:  “I don’t care whether you’ve never listened to anyone before in your lives. I am begging you right now..If you don’t disperse right now, they’re going to move in, and it can only be a slaughter. Would you please listen to me? Jesus Christ, I don’t want to be a part of this…!”

Professor Frank’s sincere, impassioned words resonated with the students and they left.

The Students Who Never Graduated Speak

Sandra Scheuer
Sandra Scheuer wasn’t a demonstrator. She was walking to class when she was killed, but she did express the idealism of the times. “I just can't buy these people who beat their chests and then do nothing. Why aren't they in ghettos or doing inner city work? Maybe I'm not going to set the world on fire through Speech Therapy, but if I can help a few people, that's good enough."

Before his 16th birthday, Jeff wrote a poem which vividly expressed his feelings about the war.

Where Does It End?

…A teenager from a small Ohio farm clutches his side in pain and as he feels his life ebbing away, he too
asks why-

...The War Without a Purpose marches on relentlessly, not stopping to mourn for its dead…

The killings at Kent State and white motorists harassing students passing through the campus on the way to downtown Jackson increased tensions on campus. Rioting began at Jackson State on May 14 and rioting students set fire to campus buildings. The firemen called for police backup and 75 heavily armed city policemen came to the campus. The firemen put out the fires and left, but the police stayed and confronted the students.

It’s not clear why the shooting started, but when it did the police fired for about thirty seconds. Phillip Lafayette Gibbs, born September 1, 1948, from Ripley, Mississippi, and James Earl Green, born December 19, 1952, a high school student died and twelve others were wounded. In the following weeks, schools and colleges around the country protested.

The killings at Kent State and Jackson State widened the divisions in an already bitterly divided America. Jeff Miller’s grandmother received an anonymous letter from someone who believed”those kids deserved it.” One of the many letters that Bill Schroeder’s mother received said in part …”We do not feel sorry for none of you parents. Keep your kids at home. “

Words on a Virtual Wall


From the Vietnam Virtual War. On April 2, 1970, about month before Kent and Jackson State, a B-40 rocket hit a UH-1H Iroquois Military Helicopter and it crashed and burned. The pilot, WO Ed Skuza, and the copilot survived with injuries, but five others died, including Sergeant William L. Vaspory of Dayton, Ohio.

On May 12, 1970, a little over a week after Kent State and two days before Jackson State, the Vietcong attacked C Company 1, 5th Infantry. Fourteen Americans were wounded severely enough to require evacuation and five soldiers were killed including Corporal Thomas A. Stephens, Signal Mountain, Tennessee.

Caputo, Philip, 13 Seconds: A Look Back at the Kent State Shootings, Chamberlain Bros, 2005

Davies, Peter, The Truth About Kent State: A Challenge to the American Conscience, Farrer, Straus & Giroux, 1973.

Grant, Edward and Hill, Michael, I Was There: What Really Went on at Kent State, C.S.S. Publishing Co., 1974 (The Perspective of Two of the National Guardsmen)

The Continuing Mystery of Kent State