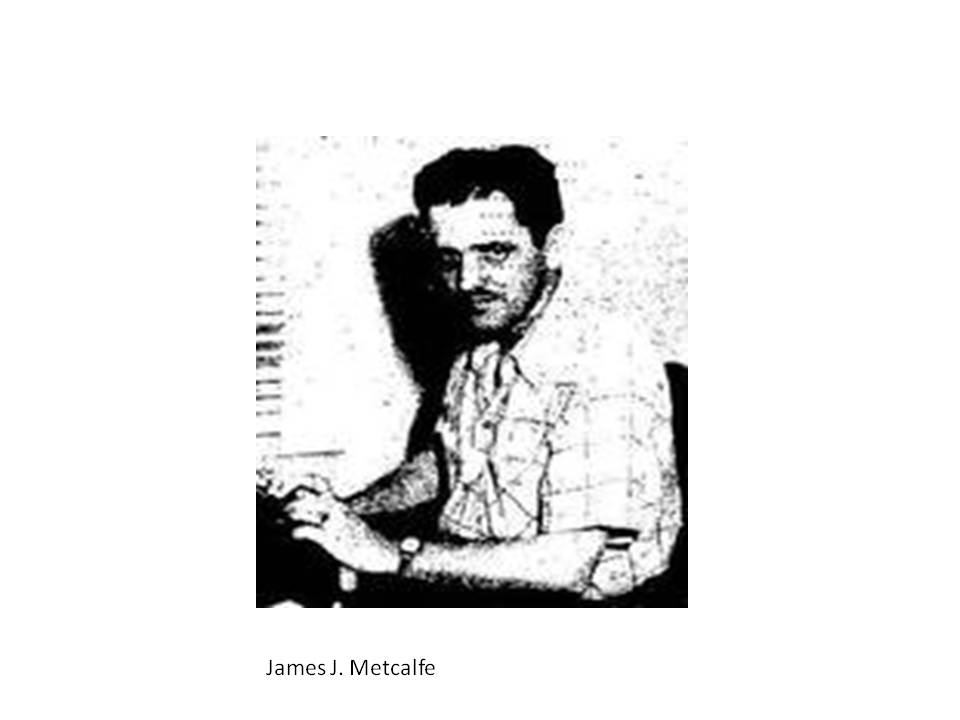 James J. Metcalfe wore many hats. he served as an FBI Agent, worked as a reporter for the Chicago Sun Times, and wrote best selling poetry.

James Metcalfe’s mother Berenice was a concert pianist who met his father on a European concert tour. James was born on September 16, 1906, in Berlin, Germany, and his parents brought him to the United States when was seven years old.

After receiving his undergraduate education at Notre Dame, Indiana, James earned his law degree at Loyola University in Chicago, Illinois. In 1931, he joined the Federal Bureau of Investigation as an FBI agent. From 1931 to 1935, James worked for Melvin Purvis, director of the Chicago Bureau, who fought Midwestern gangsters like Al Capone and John Dillinger. James helped capture criminals including Baby Face Nelson, worked on the Lindberg Kidnapping case, and assisted in the Karpis-Barker mob capture. He became a member of the Dillinger Squad and helped capture Dillinger

According to James Metcalfe, Anna Sage, the “woman in red”, had really been wearing an orange dress when she and Dillinger and Polly Hamilton went to the Biograph theater on the night of July 22, 1934. Anna's dress took on such a reddish hue in the glare of the neon lighting that newspaper writers dubbed her "the woman in red."

Melvin Purvis assigned James Metcalfe to cover the Biograph exits, alleys, and other areas and directed him to draw a sketch so each agent could be placed to cover a specific spot. When Dillinger and the two women showed up at the Biograph, Metcalfe stood directly across the street from the theater entrance and Purvis stationed himself a few feet from the entrance. When Dillinger and the women appeared after the movie, Metcalfe started across the street in Dillinger’s direction. Dillinger sensed something was wrong and ran.

The G Men's guns spat and Dillinger fell flat on his face, just within reach of the alley. Three bullets plowed into his body. Two inflicted flesh wounds, but the third tore into the back of his neck split his spine and exited from his right eye. He lay dead in a pool of blood.

Metcalfe walked away slowly. He scratched his chin. His sketches and the plan he helped formulate had worked. Why didn't he feel happier about it?

The German Bund Investigated and Exposed

In 1936, Metcalfe accepted a job as a reporter for the Chicago Sun Times, and one of his first assignments was to investigate the German Bund. The Bund masqueraded as a super patriotic organization and the SunTimes wanted to infiltrate its ranks. At the suggestion of Melvin Purvis, his former boss, Metcalfe became an American citizen to protect himself before infiltrating the dangerous German Bund. The German Bund, unlike the German American Bund, required members to prove they were born in Germany and expected its members to speak some German. It also required members to wear storm trooper uniforms.

Using his Berlin birth certificate, Metcalfe joined the Bund and attended its meetings. He collected evidence to reveal Hitler's personal sponsorship of the Bund, and its close ties with the German ambassador and counsels in the United States and other secrets. His expose led to the formation of the Dies Congressional Committee to investigate un-American activities and awakened the government to the Bund menace. He thwarted Germany's plan for systematic espionage and sabotage in America.

Metcalfe, his brother John C. Metcalfe, and William Muller wrote a series of syndicated articles exposing the Bund. They were awarded the silver medal of the National Headliners Club for distinguished journalism for the Best Story of 1937.

In the 1940s, Metcalfe started a poetry column in the Sun Times , while he worked as a reporter. His poetry column, “Daily Poem Portraits,” was tremendously popular during the 1940s and 1950s, and booklets of his poems sold by the thousands. Over 100 newspapers carried his column and his poetry appeared in Hallmark cards as well.

James Metcalfe wrote hundreds of short poems about the human condition that ordinary people could relate to and enjoy. His first book of "Portraits" contains 750 poems. He wrote about love, friendship, life, religion, time, old age, youth- the stuff of living. Metcalfe wrote and published at least 17 books of his poetry, many with Doubleday & Company.

He wrote that his poetry writing all started "when in my teens I used to fall in love with all the girls and write poems to them to win them over. It didn't always work, but it was worth trying." His poems worked with the one girl who really mattered. James Metcalfe, his wife Lillian Hammer Metcalfe and their three children, James, Donald, and Kristina Maria, lived in a modest ranch house in Dallas, Texas. He called it "the home that poems built."

Despite his two-fisted career of crime hunting and news reporting, James J. Metalfe was first and last a poet. He considered his poetry his calling in life, a gift from God, designed to bring happiness to others. He made a promise to his readers in the dedication of one of his books of poems, "And I gratefully promise you..I will not touch my pen..except it be in prayer to God...or praise of my fellowmen."

Some volumes of James J. Metcalfe's poetry include: