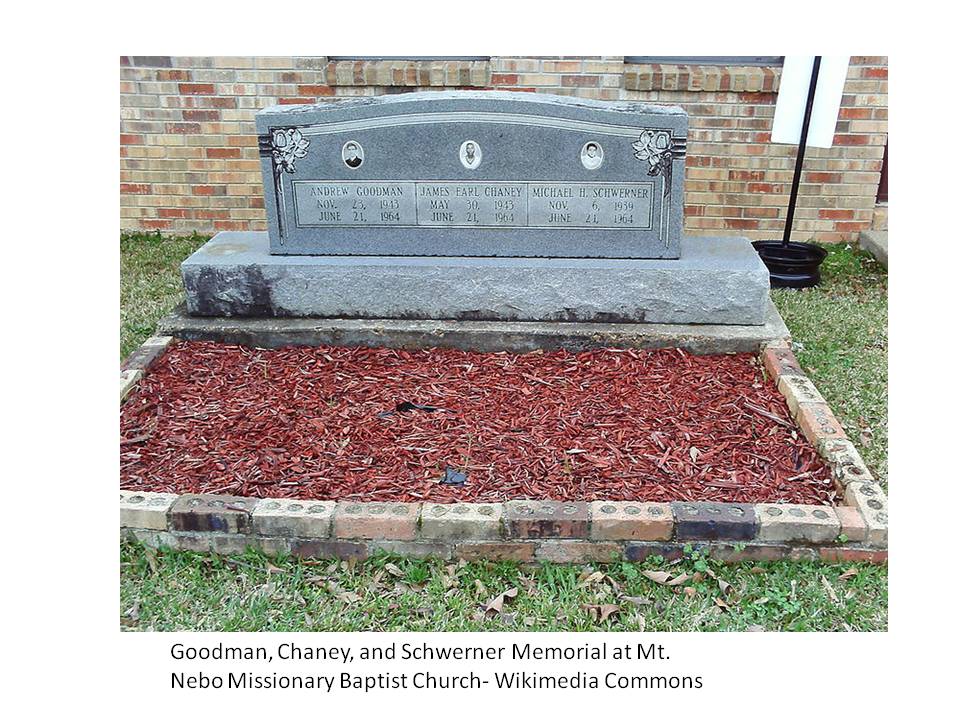 Three civil rights workers- Michael “Mickey” Schwerner, Andrew Goodman, and James Chaney- were murdered in Neshoba County Mississippi, on June 21, 1964. The long, hot “Freedom Summer” happened 46 years ago, but its meaning is as contemporary as a mouse click.

The anniversary is commemorated in the services at Mount Zion United Methodist Church on or near June 21 of every year. The civil rights workers were investigating the burning of the church and the beating of some its parishioners when they were killed.

The cities of Philadelphia and Meridian, Mississippi are also co-sponsoring the Second Annual National Conference on Civil Rights in Philadelphia, Mississippi from June 17-19, 2012. The Conference will coincide with the Annual Mississippi Civil Rights Memorial Service which remembers and honors the three civil rights workers James Earl Chaney, Andrew Goodman, and Michael Schwerner and others who participated in the Mississippi civil rights movement. There will also be memorial ceremonies at the Mt. Zion United Methodist church and at the Mt. Nebo Baptists Church.
The Philadelphia Coalition Worked For Justice and a Historical Marker

Mickey Schwerner, James Chaney, and Andrew Goodman arrived in Mississippi as part of a broader civil rights movement. The Southern Christian Leadership Conference, the Council of Federated Organizations, the Student Nonviolent Coordinating Committee, and the Congress of Racial Equality organized the Mississippi Summer Project to help integrate public facilities, to register black Mississippians to vote, and to organize a network of local leadership.

In 1962, only 6.7 percent of eligible black voters in Mississippi were registered, the lowest number in the country. White officials in the South consistently kept African Americans from voting with poll taxes, literacy tests, restrictive application processes and harassment. The recently revived Ku Klux Klan paraded in white robes, intimidating both white and black people.

Freedom Schools and a Dangerous Summer

Freedom Summer leaders traveled to Mississippi and established 30 “Freedom Schools” in towns across the state. Many white college students were assigned to teach Freedom School curriculums that included black history, and the philosophy of the Civil Rights Movement as well as remedial instruction in reading and arithmetic. Freedom summer leaders had anticipated drawing about 1,000 students the first summer, but the enrollment reached 3,000.

Freedom Summer activists faced threats and violence from white supremacist groups as well as from local residents and police. During the Freedom Summer, 37 black churches and 30 black homes and businesses were firebombed or burned, often without investigation or prosecution. The police arrested over 1,000 black and white volunteers and white mobs or racist police officers beat over 80 people.

Murder Was the Most Fateful Event

The most fateful event of the Freedom Summer happened on the night of June 21, 1964. James Chaney, 19, Andrew Goodman, 19, and Mickey Schwerner, 25, went together to investigate a bombing at Mount Zion United Methodist Church near Philadelphia, Mississippi.
James Chaney had grown up in nearby Meridian, Mississippi and he had become involved in civil rights work as a young student.
Michael Schwerner or "Mickey" as everyone called him, a Jewish New Yorker came south to Meridian to set up the local COFO office. Some of his family members had perished in the Holocaust and he believed that he could stop the spread of that kind of hatred in America.

Andrew Goodman came from a well known liberal family in New York City and while studying at Queens College in New York he joined the Congress of Racial Equality. He volunteered to take part in is Freedom Summer campaign.

The same day that Andrew Goodman arrived in Meridian, Mississippi, Sunday afternoon, June 21, 1964, he and James Chaney and Mickey Schwerner went to Longdale to visit the Mt. Zion Methodist Church that the Klan had fire bombed.

A Gang of White Men Murdered the Civil Rights Workers

Deputy Sheriff Cecil Price arrested the three civil rights workers when they were on their way back to the CORE office in Meridian and locked them up in the Neshoba jail. About 10:30 that night, they were released and ordered to leave town immediately.
A gang of white men that included law enforcement officials overtook them and when they stopped, they were pulled out of their station wagon and driven to a lonely gravel road off the highway and murdered.

A Burned Out Station Wagon and an Earthen Dam

On June 23, 1964, the burned out station wagon the men had been driving was found. On August 4, 1964, 44 days after they disappeared, the bodies of James Chaney, Andrew Goodman, and Michael Schwerner were found buried in an earthen dam on the Old Jolly Farm about eight miles south of Philadelphia.

Despite the burnings of dozens of churches, the assaults, and the murders, the Freedom Summer Project made an impact. The volunteers registered more black voters and challenged the nearly all white Democratic party and changed the national political landscape forever. Within two years 100,000 new black voters had registered and some were running for office.

The sacrifice of Andrew Goodman, Michael "Mickey" Schwerner, and James Chaney lives on in each new generation of Mississippi voters and in a more racially mature United States.

Watson, Bruce, The Savage Season that Made Mississippi Burn and Made America a Democracy, Penguin Group, 2010