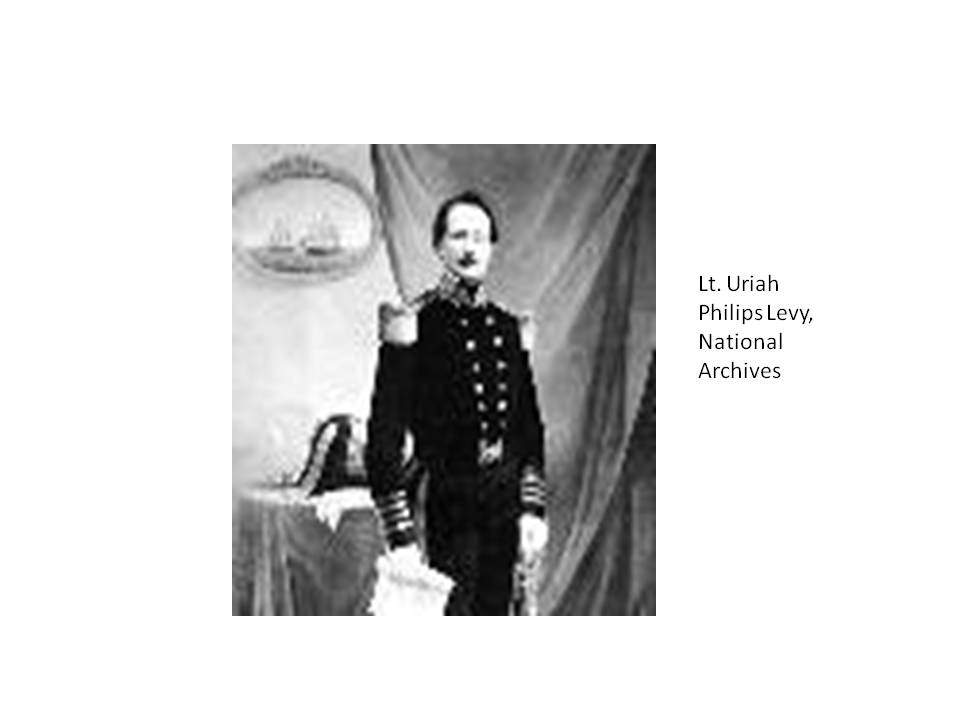 Uriah Phillips Levy who was a Jew, joined the American Navy fought the prejudice he encountered, purchased Monticello and began to restore it.

Uriah Phillips Levy was born in Philadelphia on April 22, 1792. By the time he died on March 22, 1862, Levy had been court martialed six times and stricken from the Navy rolls, had his rank restored by the United States government and was buried with full military honors. He had also bought and began to restore, Monticello, the former home of Thomas Jefferson. He spent his entire career combating prejudice against his Jewish origins.

Uriah Levy was the son of Michael and Rachel Levy of Philadelphia. When he was eleven, he ran away to sea and served without the consent of his parents, as a cabin boy on coasting vessels. In 1806, when he was fourteen, Levy began a four year apprenticeship under John Coulter, a Philadelphia merchant and ship owner. Coulter placed Levy in the best naval school of Philadelphia for nine months during the 1808 embargo. After his apprenticeship, Levy served as first mate and by October 1811, before he was eighteen, he had made enough money to become part owner of a schooner. The schooner was the George Washington, and Levy took command of her as master.

The George Washington was lost in January 1812 through a mutiny. When Levy went ashore on the Isle of May, his mate and crew ran away with the twenty five hundred Spanish dollars and a cargo of Tenerife wine. Levy was stranded among strangers and was seized by a British press-gang. He succeeded in getting his case before Admiral Sir Alexander Cochrane and was released. He worked his way back to American and eventually returned to the West Indies and pursued the pirates who had stolen his cargo. He caught the pirates and took the ringleaders to Boston, Massachusetts where they were hanged.

At this point in Uriah Levy's life, the War of 1812 had begun. One its causes was the British Navy's practice of press-ganging men into its ranks without ascertaining whether or not they were really British citizens. Uriah Levy was now 20 years old and he received an appointment as sailing master in the United States Navy on October 21, 1812.

Levy served on harbor duty until June of 1813, when as a volunteer acting lieutenant, he was assigned to the brig Argus, which carried William Crawford, the American envoy, to France. Levy and William Crawford became friends and Crawford gave him letters of introduction to many distinguished people, including Marquis de Lafayette.

After landing the passengers, the Argus went on a cruise, destroying about five million dollars worth of British shipping. Levy was placed in charge of a valuable prize, and then he was captured by a British frigate in August 1813. He and his shipmates were put in prison and Levy spent sixteen months in English prison.

Levy is Promoted to Lieutenant, but Combats Prejudice of Shipmates

When the War of 1812 ended Levy, along with other officers, asked that his services be recognized by promotion under the rule of the Navy that"masters of extraordinary merit and for extraordinary services may be promoted to lieutenants."

Levy's sponsors were Commodore David Porter, Commodore Stephen Decatur, Commodore James Rodgers, and Commodore Charles Stewart. The line officers strongly opposed Levy's appointment. They claimed that his advancement would demean older shipmen whose promotion it would preclude. Levy received the promotion, but over the next ten years, he had to fight his shipmate's prejudice against his Jewish ancestry and the fact that he had risen from the ranks. He was court martialed six times and dismissed from the service twice.

In 1816, Levy found himself on board the 74-gun Franklin with Commodore Charles Stewart, the same man who commanded the Constitution when she captured the British ships Cyane and Levant. Levy found the tolerant attitudes of Stewart and his men that had existed for the sailing masters in time of war had changed. Now he was the man who had been promoted to lieutenant in time of peace and a contender in the competition for promotion.

Lt. Levy Saves a Life and the Emperor of Brazil Offers Him a Command

In 1827, Lt. Levy served on the Cyane in the harbor of Rio de Janeiro. A press gang seized one of the American seamen enjoying his liberty. The captive sailor spotted Midshipman Moores and called for help. Moores attempt to rescue him and a Brazilian admiral pushed him back. Midshipman Moores knocked the admiral down while another Brazilian officer slashed at Moores with his saber. Lt. Levy stepped in and received the saber slash. A soldier thrust a bayonet in Moores' side. After that the midshipman told everyone that Lt. Levy had saved his life.

The Emperor of Brazil happened to be visiting the navy yard and saw Levy with his arm in a sling. The Emperor complimented Levy at how well he came to the rescue of his shipmates. The emperor said that he wanted zealous officers like Lt. Levy in his own service and offered the lieutenant command of a new sixty gun Brazilian frigate. Lt. Levy thanked the emperor but refused the offer. He said that he "loved his own service so well that he would rather serve in it as a cabin boy than as a captain in any other service in the world."

Lt. Levy had an exciting adventure in Paris on the Fourth of July, 1833. He had been sent to France as a bearer of dispatches and attended a dinner on the fourth, with General Lafayette the guest of honor. Some of the guests hissed and groaned at one of the toasts which saluted "Andrew Jackson, President of the United States." Lt. Levy struck one of the hissing guests in the face with his glove and challenged two others to duels. The offenders preferred to apologize.

In 1844 Commander Levy was promoted to a post-captaincy, and he spent the next ten years trying to obtain a command. His public service during this time was unofficial and indirect assistance in abolishing flogging in the navy. Through the years his applications for a command were pigeonholed. When war with Mexico was declared in 1846, he appealed to be allowed to serve his country. His appeals were ignored. A few years later, a potato famine occurred in Ireland and the United States government decided to send a ship load of provisions to relieve the Irish people. Captain Levy applied to command the ship, offering to devote his pay to charity. The government also ignored this request.

In 1855 the Shubrick Board or Commission of Fifteen was formed by the United States Navy. It held secret meetings and dismissed the people it chose. Levy was one of the people it dismissed. In September, 1855, without warning the commodore received this letter from the Secretary of the Navy informing him that he had been stricken from Navy rolls.

Lt. Levy Defends Himself Before the Court of Inquiry
He defended himself before the Court of Inquiry in 1857 and his rank was restored. He received a command and became flag officer of the Mediterranean Squadron. In 1858 he commanded the Macedonian during a cruise in the Mediterranean as flag officer of the squadron. In an ironic historical twist, his old ship, the United States, had captured the Madeonian from the British early in the War of 1812, about 600 miles west of the Canary Islands. After the battle, the Macedonian was taken into the United States Navy.

The United States later became the first ship to be taken into the Confederate Navy in April 1861 after the Confederarcy took over the Norfolk Navay Yard. When the Civil War broke out in 1861, Levy was 69 years old. He offered his services to President Lincoln, but was politely refused.

Uriah Phillips Levy Purchases Monticello and Bequeaths it to the Nation

Uriah Phillips Levy had married his wife Virginia, late in life. Besides his family, his passion was Monticello, the home of former President Thomas Jefferson, which he had purchased in 1836. Levy died in New York City on March 22, 1862, and was buried with full naval honors. He bequeathed Monticello to the nation, but his will was contested and the estate passed to his heirs.

One of his heirs was New York Congressman Jefferson M. Levy. Jefferson M. Levy bought off the other heirs and restored Monticello which had fallen into disrepair. The efforts of Levy and his heir Jefferson Levy made it possible for the Thomas Jefferson Memorial Foundation to acquire Monticello and 640 acres of adjacent land in 1923. The Foundation dedicated it as a national shrine on July 4, 1926, the 100th anniversary of Jefferson's death.

The Levy's Contribution to American History

American historians have ignored Uriah Phillips Levy or given him mixed reviews. The Dictionary of American biography notes that "despite his sensitiveness, vanity, and occasional insubordination, Levy was a courageous and humane officer and a fervid patriot."

The career of Uriah Phillips Levy wasn't as well known as that of Alfred Dreyfus in France, but the impact of prejudice on his life was just as enduring and his purchase and restoration of Monticello invaluable