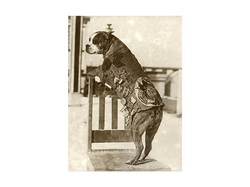 In 1914, Germany had about three thousand dogs in the army and Russia, Belgium, France, and England had dog soldiers.  The United States didn't have a formal canine battalion, but Stubby sniffed out a trail for other dogs to follow. In 1916, he appeared on Yale Field in Connecticut, and made friends with the soldiers there.

Army regulations strictly prohibited transferring pets, even from one training camp to another, but Marine Corporal Robert Conroy risked his stripes to smuggle Stubby onto the transport that was taking them to France. Smuggling a bull terrier wasn't easy, but Robert did it.

Conroy's unit was sent to the front, which meant trenches, tangles of barbed wire and endless rain that turned solid ground into soupy mud.  The soldiers ate, fought, and slept in mud against a backdrop of booming artillery. Instead of the moon and stars lighting the night sky, white rockets blossomed like fireworks.

Stubby adapted well to these conditions. He made a game of ducking the big shells and diving into foxholes. His ultra-sensitive ears could hear the shells long before the soldiers could.  Soon the men in his company began watching Stubby. When he took cover, they did too. His judgment about the shells was never wrong.

When men were hit, Stubby rushed from one to the other, whining in sympathy and licking their hands and faces. Ambulance dogs were trained to find wounded men, but Stubby trained himself to be an ambulance dog. Often wounded men would be half‑buried in dirt, lying in a trench or hidden under bushes where rescue parties passed by without seeing them, especially if they were unconscious or too weak to cry out.

The ambulance dogs were sent out with first aid kits strapped on them and wearing a large red cross.  The ambulance dogs would return to the stretcher party and lead them back to the spot where the wounded were located. Although Stubby's method was not as fine-tuned, it was just as effective. He would stand guard over the wounded men until the enemy fire slackened, then he would rush away to find his master. If he couldn't find Conroy, he would dash to the nearest group of soldiers and bark, race back and forth, and tug at pants legs until someone followed him back to the wounded. He saved many lives this way.

Stubby decided that the smell of gas was dangerous. One time he smelled gas a few minutes before it reached the trench where Conroy and his fellow Marines slept. He woke them by running up and down barking.  The men had enough time to put on their gas masks before the gas reached them. Stubby didn't have a mask, so Conroy rushed him to the nearest hospital behind the lines.  He received the same first aid as a human soldier and it took him just a few days to recover.

By this time, the entire division loved Stubby. They tried to get a gas mask for him, but there was none that would fit a bull terrier's face. But the men didn't come under a gas attack again, so they stopped worrying about a mask for Stubby.

Eventually, Stubby became the hero of the American Expeditionary Forces. He had his own service jacket. It was a chamois coat embroidered with all the Allied flags that the women of Chateau‑Thierry made for him.

When the war ended, Stubby went back home with Robert Conroy. On the voyage home he took a daily constitutional on deck and never missed a meal. Back home, he became a life member of the American Red Cross and the American Legion, the Eddy Glover Post. No. 6, New Britain, Connecticut.  He attended American Legion meetings and led their parades wearing his embroidered jacket.

Often when Robert Conroy stayed at the Hotel Majestic in New York where dogs were not allowed, Stubby was allowed.  Mr.Copeland Townsend, the owner of the hotel, shook hands with Stubby and had him put his paw print on the register. The choicest cuts of meat were sent to his room, and everything was "with the compliments of Mr. Townsend."

Stubby died on April 14, 1926, and a plaster cast was made of his body to encase his ashes. It was presented to the Smithsonian Institution in Washington D.C. to be put on display as a tribute to his heroism.