Rub-a-dub-dub in Your Historical Bathtub! 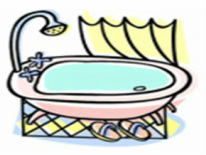 From the time the first cave people tumbled into a stream and accidentally discovered the merits of bathing, people have wrestled with the problem of to bathtub or not to bathtub.

The ancient Greeks and Romans at first were distrustful of bathing but like gradually dipping your little toe into cold bath water, they got used to the idea in stages. By the Fifth Century people had grown so accustomed to bathing that Athens sported public baths. By the time of Socrates the baths had become social centers where all of the illustrious citizens of the day gathered for communication and cleansing. The communication and cleansing took place in COLD water for the Spartan tradition of scorning physical comforts dictated nothing would do but cold water. Plato even went so far as to advise the Greeks that hot baths were suitable only for the aged.

The early Romans took the cue from the Greeks and by the end of the Fourth century B.C., Rome also had public baths. Like the Greeks, the Romans at first used only cold water, but unlike the Greeks, they weren’t content with the status quo. They took water from the hot mineral springs abounding around Rome and channeled it into their baths by means of aqueducts.

The early Christians didn’t take to bathing as enthusiastically as the Greeks and Romans. Instead of considering cleanliness next to godliness, they considered bathing sinful and a preoccupation with earthly comforts. Most of the early Christian leaders exhorted their congregations to refrain from bathing. However, in the great unwashed masses of the Dark Ages, Pope Gregory I shone forth as a beacon light for cleanliness. Bathing on Sundays was permissible Gregory said, as long as too much time wasn’t spent doing it.

During the Eleventh Century Adalbert, Archbishop of Hamburg and Bremen in Germany was considered to be a very pious man because he refused to bathe.
The general populace at that time considered non-bathing a penance for sin and indulged in it accordingly. On the other side of the coin, St. Agnellus of Naples during the Seventh Century ordered priests to bathe and even provided free soap. Charlemagne continued the tradition of bathtubs by building baths outside his palace at Aachen making good use of the local hot springs. He wasn’t stingy with his baths either inviting all of his friends and soldiers to share in their benefits.

Bathers in the Middle Ages had more fun than those of modern days. Instead of simply taking a bath and drying off, Medieval bathers had music, wine, food and often a member of the opposite sex to entertain them while bathing. In fact, mixed bathing wasn’t an uncommon practice although all of this pleasure still took place in cold water, because warm baths were still frowned upon and considered an indulgence.

The baths used in Europe during the Middle Ages were purely functional, but those built by the Moorish rulers of Spain were studies in elegance, style, and abundance. In Cordoba alone, there were 300 public baths.

The Crusades reintroduced the Roman baths to Europe, the same baths the Moslem world had adopted as its own and Christians of the Byzantine Empire had preserved at Constantinople.  In spite of the influence of the Crusades, an Arab writer of the Eighteenth Century contrasted Moslem cleanliness with the dirtiness of Western Christians which the Arabs considered disgraceful..

About the time of the Crusades, the influence of the East caused a change in Western bathing habits. With the aid of men like the Duke of Wellington who lived in India during the Eighteenth and early Nineteenth centuries, the western world was again exposed to the benefits of cleanliness. When the Duke came home to England, he brought his daily bathing habits with him and he indoctrinated his fellow countrymen. Travelers in Russia during the Eighteenth century brought home intriguing tales of Russians taking vapor baths.

Yet, the bathing habit still hadn’t caught on in the courts of France and England. At the court of Louis the Fourteenth who never so much as washed his feet, the request of a Persian ambassador for a bath was considered to be very odd.

Louis the Fourteenth wasn’t the only one with an attitude about bathing and bathtubs.  Many Eighteenth Century Frenchmen felt that bathing was to be used only as a last resort in certain illnesses. There was, however, a French woman who felt differently. Marie Antoinette bathed frequently, but she was always accompanied by two attendants. And the etiquette that she had learned in Austria demanded that she wear a long flannel gown, buttoned up to her neck while she bathed.

The bathing customs of the English court didn’t differ much from those of the French. Queen Elizabeth was considered unusually fastidious because she bathed once a month “whether she required it or not.”

King John bathed three times a year before the principal festivals which was as often as the English monks took a bath and more often than the English man on the street did. There is an English proverb of the Elizabethan period which advises “Wash your hands often, your feet seldom and your head never.”

By the time the Victorian era rolled around, bathing had evolved from something done once every two years to a continuous practice, but the bather still had problems- for instance, how to get and keep hot water. One enterprising Victorian inventor produced a bath with gas burners beneath it. This invention worked wonderfully well, except for one drawback. How did you sit in the tub when the water got too hot?

The Old World practice of bathing took a while to convert the New World. On December 20, 1842, Adam Thompson of Cincinnati, Ohio, became the first man in the United States to install and use a bathtub. He neglected to hire a press agent, though, for one newspaper thundered, “The bathtub is a degenerate luxury designed to corrupt the democratic simplicity of the Republic.”

Doctors also denounced the bathtub saying that “it is dangerous to the health and bound to result in phthisis, rheumatism, fevers, inflammation of the lungs, and the whole category of zymotic disease.”

The Philadelphia Common Council in 1843 even went so far as to try to pass a resolution prohibiting bathing between November 1st and March 15th. The Resolution lost by only two votes. One very illustrious citizen of Philadelphia continued taking his baths all during the Council debate. Benjamin Franklin used his copper slipper bath regularly, despite the disapproving comments from his contemporaries and the Council.

Along with the Pennsylvania persecution, the Virginia legislature of 1843 levied a $30 tax on all bathtubs and the city of Boston made them unlawful for anyone to use except on medical prescription.

The history of American presidents and bathtubs is sometimes immersed in legend. Although President Millard Fillmore sometimes gets the credit for the first White House bathtub, in reality James Madison probably was the first president to bathe in the White House in 1814, although the water had to be heated on a stove and carried in a bucket. Indoor plumbing arrived at the White House in 1834 during Andrew Jackson’s administration and presumably he used it.

President Millard Fillmore had a bathtub installed in the White House in 1853, and from then on bathtubs were officially used.  By 1860, a New York paper was reporting, “it is now virtually assured that every major hotel in New York has a bathtub and some have two or three.”

President William Howard Taft who measured six feet two inches tall and weighed over 300 pounds, contributed to bathtub history. While in the White House, legend says that he got stuck in the normal sized bathtub and he had a 7 foot long 41 inch wide bathtub installed that could hold four men of normal size.

Today bathtubs come in as many styles and sizes as the people that bathe in them. Songs have been sung about them, gin and other beverages have been brewed in them, and they are historical artifacts that are visited and appreciated every day.
​