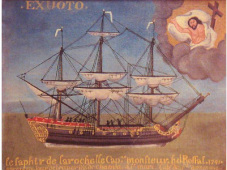 Captain Harry Ward prospected for gold in California, became the reluctant captain of a slave ship, fought with the Sixty Ninth New York Regiment in the Civil War, and avoided sinking with the steamer Pacific. He spent the last part of his career as pier superintendent of the Phelps Bros and Florio Rubattino Lines in Brooklyn.

Later in his career, Captain Ward grew stout and burly, but all during his career he met the up and down challenges of a sailor’s life with good humor and energy. One of his biggest challenges came when Captain Louis Kraft tricked him into becoming the captain of a New York fitted out slaver called the Julia Eliza R.

In 1849, prospectors discovered gold at Sutter’s Mill in California and eager fortune hunters flocked to California overland across mountains and prairies and across rivers, lakes, and oceans.

Harry Ward listened to the advice of William, one of the proprietors of the boarding house where he lodged in New York and set sail from New York bound for San Francisco as part of the crew of the bark Southerner. He earned 25 cents a month, or a total of a dollar for a four month voyage. After voyaging to Manila in the Philippines and suffering a two month illness in San Francisco, he finally shipped to Boston by way of Calcutta, earning wages of $10 a month.

After four months passage, Captain Ward landed in Boston broken in mind, body, and pocketbook. He stayed in Boston for four days and then booked passage to New York, arriving at his boarding house in New York with just seven dollars in his pocket.

One day, William, one of the brothers who ran the boarding house told Captain Ward about a schooner captain who needed a mate. Captain Louis Kraft needed more than a mate. He needed someone to be master of his schooner, the Julia Eliza R., because his ill health would not allow him to sail her himself. Captain Kraft had already ordered the tug and the Julia Eliza R. was ready to set off for the Cape Verde Islands and a market.

Captain Harry Ward decided to sail on the Julia Eliza R. and he quickly obtained the equipment he needed. Saying goodbye to his friends, he made his way to Pier 14, the East River, where William had told him the Julia Eliza R., would be waiting. The Julia Eliza R., a weathered old veteran of a vessel, was waiting. Her stern declared that she hailed from Boston, but Captain Ward speculated that she was registered in Baltimore. The name Baltimore could be seen under the fresh coat of paint. She had been renovated and carried a long foremast and a brand new topsail.

Later that afternoon a tug pulled alongside the Julia Eliza R. On board was the consignee or owner of the cargo, who was a Spaniard, the crew, and a shipping clerk. Captain Ward did a double take. The shipping clerk was “One Armed Tom,” an old friend. “One Armed Tom” read off the items on the manifest and the Julia Eliza R. got underway. When she anchored at the quarantine landing, Captain Louis Kraft came aboard, along with a large group of Spaniards and one American. For years the American had been one of the most successful slavers from the Port of New York. Every week, slavers were fitted out in New York despite the fact that the Anti-Slavery Society kept a careful watch for them.

The Julia Eliza R. and both tugs stayed on course while the men on board enjoyed themselves with the help of wine and New England rum. Captain Ward kept busy tidying the decks and preparing to go to sea. Before the Julia Eliza R. reached Sandy Hook, the consignee of the cargo came on deck and invited Captain Ward to come below and meet Captain Louis Kraft and his friends. Captain Kraft was tall and swarthy and his hands were deformed from a fight with a British prize crew while they were capturing the slaver that he commanded.

After a toast all around, the visitors left on the tugs. Captain Ward and Captain Louis Kraft set their course for the Cape Verde Islands, two small archipelagos, about 400 miles off the western coast of Africa. The Cape Verde Islands were a notorious trading center for African slaves and an important stop for transatlantic sea traffic.

For a few weeks, Captain Ward reveled in the pleasures of cognac, Havana Cigars, and a peaceful shipboard routine. He soon had the Julia Eliza R. smoothly performing her slow, five knots a day. He enjoyed life aboard ship so much that he soon forgot his initial wariness of Captain Kraft. Then one day the Dutch second mate didn’t feel well and wanted a drink of whiskey to cure his ailment. Captain Ward and the Dutch mate discovered that instead of holding whiskey most of the barrels held water or kettles that were to be used to cook food for slaves and other equipment that made up a slaver’s outfit.

As the Julia Eliza R. neared the Cape Verde Islands, several British and Portuguese parties boarded her, because contrary to popular perception, slavers usually were slow old tubs that could go only about four or five knots any hour. Boarding crews found no evidence on the ship’s manifest or its papers to show that it wasn’t a legitimate trader, but Captain Kraft no longer hid the fact that he had outfitted a slaver. He told the crew that if they didn’t want to be part of the enterprise, they could leave the ship, although unhappy crew members didn’t have too many places to go at 8 degrees south latitude.

The Julia Eliza R. Carries A Cargo Of Slaves

As the Julia Eliza R. neared the coast of the Cape Verde Islands, the Portuguese passenger took charge. The crew threw barrels of water overboard and fitted the timbers to make quarters for the slaves. The Julia Eliza R came into shore and like magic, hundreds of Negro young men were brought down to the sandy bay where she was anchored. An hour later, 680 Negros had been loaded aboard the Julia Eliza R. The few older Negros were in charge of the younger ones, and for the most part the captives were well treated because each one would bring $1,000 in Cuba, where the Julia Eliza R. would take them to the market there.

The Portuguese passenger and his crew were as cruel as they dared be to the captives who lived between decks and on the main deck covered with tarpaulins. One time Captain Ward was so upset about the way the Portuguese passenger and his crew treated the captive Negros that he threw his sextant overboard. He sailed the Julia Eliza R at random until they finally fell in with another ship and he bought another sextant for $200. As he continued the voyage to Cuba, Captain Ward had to be on the lookout for British and Spanish cruisers. The British captured slavers and set the captives free and the Spanish were on the lookout for booty and prizes.

The Julia Eliza R. had three scheduled ports of call on the south side of Cuba. A boat would come from shore and display a certain flag when it was safe to land and the first and second places were unsafe to land the captives. A boat came out of the third landing place and led the Julia Eliza R through a narrow passage where the trees touched its masts and into a lagoon where the captives were unloaded.

The next day the crew took the Julia Eliza R. out to sea, cut holes in her bottom, and watched her sink into the blue depths of the Caribbean Sea. The Julia Eliza R’s crew got into her small boats, and rowed to a nearby plantation where they settled up with the consignee. Each crew member received $1,500, but Captain Ward claimed and received $15,000. Afraid of being robbed, he left the plantation and hid in the canebrake for ten days. The plantation was not very far from Cardenas, Cuba, so he made his way to the sea. Captain Ward had to try several times before he found a vessel and a captain that would take him on as a crew member so he could work off his passage back to New York.

News of the landing of the captives reached the ears of the Spanish authorities and they were eager to get their share of the money made in the transaction. Captain Ward had to give the captain who finally took him on board $3,000.

When he reached New York, Captain Ward rebuilt his life. He escaped the January 23, 1856 sinking of the Collin’s steamship Pacific when he had a disagreement with the mate and refused to make the voyage. He fought with the Sixty-Ninth New York Regiment in the Civil War, and settled into a position as the pier superintendent of the Phelps Bros and Florio Rubattino Lines in Brooklyn for the last part of his career.