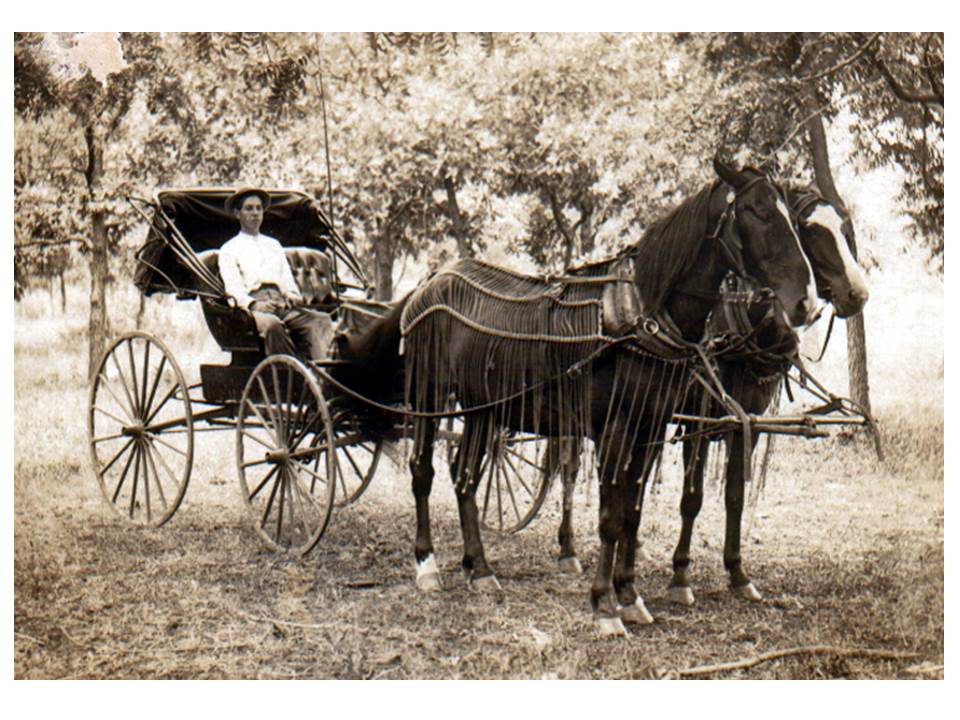 When Dr. Hugh M. Parshall was growing up and developing his love of horses in Highland County, Ohio, in the last decade of the 19th Century, there was more than one way to win a horse race.

Despite his tender years, Doc had already seen two or three of them at county fair races. "Old Nick," one of the contestants, put hooks on all four wheel hubs of his rival's sulkie and pulled them off at crucial points in the race. Another competitor, "Sleazy Beezy," carried a mouthful of bird shot and blew it into the ear of any horse who tried to pass him.

But Doc remembered Old Waxy more vividly than any of the others. Old Waxy was the contender who by adding a suspensory ( a bandage for the scrotum) once won a stallion race with a fourteen year old mare!

Tradition around Samantha, Ohio, where Doc was born in 1900,  has it that he started loving horses early. When he was a sturdy kid of eighteen months, he tore up his diaper to make a harness, hooked up one of Elmer Jenkins' old coon hounds to his go cart and taught him to beat the pole hose to the rail!

Doc's father Les tended store and sold crackers, cheese and plugs of Hillside Navy tobacco in Hillsboro, about five miles north of Samantha. Then after a time, Les bought a hardware store in Hillsboro, and Doc became a city boy. Since he was stocky, sturdy boy, he played some football in high school, but his real love was still horses.

Every second Saturday was the red-letter day in town. It was stock sale day. On stock sale day, all day, horse traders displayed horses and raced them up and down Short Street to the trading mart. Whether  Short Street was muddy, dusty or frozen, the horses raced every second Saturday and Doc was always there. He carried a buggy whip and examined hocks, hooves, withers and teeth.  One year, word got around Short Street that Doc was looking for a three minute trotter and a three quarters buggy, which was a dead give away to his intentions. Hillsboro belles haunted their mirrors and bit their lips to make them redder. Doc was courting, but his heart belonged more to mares than Misses!

In the meantime, Les moved his family to Beach Street where the mud and dust were deeper.  Then Doc decided that he wanted to become a vet, which surprised Les about as much as a mare dropping a foal. Les gave Doc money to pay tuition and board at a Dayton College and he seemed to be on his way. Then Doc found her. She was the perfect filly. He paid for her with his college money. Her name was Princess Mac and she was a snappy filly with a local pedigree, which was plenty good enough for Doc.

Using a borrowed sulky, Doc drove Princess Mac ten miles down the pike and entered her in the 3:30 trot and pace at the Rainsboro Fair. His unexpected arrival upset some apple carts. One old time driver took him behind a barn and gave him some advice. The old timer told Doc it would be foolish to win and give Princess Mac a record that would put her into faster class races.

"The thing to do is finish second," the old timer told Doc.

Following the old timer's advice, Doc finished second. He also finished second at JImtown, Wilmington, and several other fairs. Then it dawned on him that the sage veteran who had given him the advice to finish second had finished first himself whenever possible. Doc won the next race, sold Princess Mac for $1,450, vowed to always win if possible and went home to repay Les and be forgiven.

Instead of being angry, Les told Doc about a special race horse he had just seen. Doc said that he wasn't interested in race horses.  He just wanted to go to college. Les took him to see the horse and sealed Doc's fate. He studied veterinary medicine in the winter and raced horses on the cotton candy circuit in central Ohio and adjoining states all summer. Starting with his first season, he became one of the leading drivers in the country.

In his gangling colt days, Doc had a rough track to travel. At an average race, about eighteen horses started in three tiers on a thirty foot track. Judge Roy Reynolds held his whiskers to one side and yelled "Go!" Every drive shut his eyes and pulled for the rail. On the first turn, the air was full of hubs, spokes, tires and drives. Any horse that got safely around the turn was home free, unless he got bird shot blown in his ear or overheated.

Hillsboro turned out to be Doc's place in the sun, not Goshen, Lexington or Randall. He came back to his home town when he was 21, and won every race at the fair and every heat of every race. He became Hillsboro's favorite son.

On all of the Grand Circuit tracks Doc was famous for two things - his colors and his watch. Doc got his colors when Tom Murphy, the former champion, grew old and decided to retire. He bundled up his flag and sent it to Doc, along with his racing crown. Doc used this for his good luck charm and soon became known as the red, white and blue man of the tracks.

His other trademark was a match. Although being a horseman, he never smoked, as a boy Doc always carried a stem of timothy in his mouth. As he grew up, he replaced the timothy with a match and carried one in his mouth for every race. He denied being superstitious, but he was never seen without a match in his mouth!

Eventually, Doc met a pretty human filly by the name of Ulah Duncan, married her, and the newly-weds moved to Urbana. In time, they had three sons that Doc loved as well as he did any of his horses. World War I broke up Doc's horse racing for awhile, but he served mostly in Southern Camps and learned a lot more about horses.

In 1929, Doc accomplished a horsemanship miracle. He bought a crippled outlaw pacer named Counterpart. Counterpart hadn't raced in two years and was so vicious that nobody dared enter his stall. Doc cured Counterpart and tamed him so well that his sons played marbles under his hooves. Doc also drove Counterpart to a straight heat triumph in the $25,000 Kalamazoo Derby, chewing his match all the time.

In 1934, Doc was still chewing his match as he drove Lord Jim to victory in the Hambletionian. His other entry, Muscletone, was driven by his brother Daryl and finished second.

In 1939, still chewing his match, Doc drove Peter Astra to win his second Hambeltonian, and he chomped on his match when he drove King's Counsel, a two-year-old, to the record time of 2:01 1/4.

For two generations, Doc dominated harness racing and for thirteen successive seasons, he won more races, more money, and developed faster horses than any other man in the country. He drove more heats in two minutes or less than any driver ever did. He won practically every big stakes race in the country and twice captured the Humbeltonian. Altogether, he participated in more than 1,000 races, sporting his red, white, and blue colors. In three other years, he was first either in races won or in money.

Besides expertise, Doc had horse sense. He owned, trained and drove hundreds of great race horses. His hunch about Counterpart turned out to be correct and he loved Counterpart the best because the horse paid for his home in Urbana, helped educate the boys, and paid the feed bills. King's Counsel, he sold for $20,000. He wasn't as lucky with Promoter, a colt who seemed to be a sure champion. Promoter fell and hanged himself in his stall. Another of Doc's horses was Fearless Peter, a Peter Volo colt and half brother of Peter Astra. Doc expected him to win the Hambletonian and as a two-year-old, Fearless Peter seemed unbeatable. Then he turned pacer and although he won 17 races as a three-year-old, pacers didn't run the Hambletonian.

In 1941, Doc had about fifty of the fastest harness horses in the world in training at Pinehurst, his horse training farm. They were entered in practically every big stakes race in America and rivals complained that Doc had cornered most of the champions of the United States. He was traveling like the Ringling circus with about a quarter of a million dollars worth of horses, fifteen or twenty thousand dollars in trappings and equipment and an army of assistants, drivers, secretaries, and shin sores.

Then a string of misfortunes befell Doc, ending with World War II. There were cold, wet springs, bad luck, cancelled races, reduced purses, higher express rates, skyrocketing feed bills and the War. Doc owned about 12 high-priced colts himself and being caught with 40 or 50 horses under these conditions was risky. He shed horses, trying to get from under before harness racing died entirely. He also tried to get into the Army, but was considered too old at 44.

In 1944, Doc trained only a few selected horses and became a racing judge when the Army turned him down. He was a champion judge too. No driver could put over any trick on Doc.  He had seen them all, including the famous suspensory!

In the winter of 1944 and the spring of 1945, Doc trained a string of nine two-year-olds for Mrs. Thorne Smith, a wealthy horsewoman from Milbrook, New York, and Miami, Florida. He had an eye turned toward developing a Hambeltonian candidate for 1946.  Mrs. Smith surprised everyone by marrying Doc's kid brother Daryl, an Army officer. Daryl was a pretty good horseman himself and suddenly, Doc's boss!

Doc didn't worry about it, not him. He was in fine physical condition, down to 205 pounds and eager to trot. As long as he heard his wife's laughter and the tinkling of ice in a highball glass, Doc was happy.  As long as he could hear the baying of a coon hound under an October Ohio moon and the rhythm of hooves of trotting horses on Highland County clay, he was happy!