Clara Zetkin Speaks Against Hitler in the German Reichstag 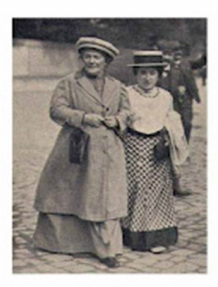 Clara Zetkin fought all of her life for Socialism and Communism and for women’s rights. She made her last speech in the German Reichstag against Hitler.
“The German Communists have only one good man and that is a woman: Clara Zetkin.” Lenin

Time had nitpicked at the body of Frau Clara Zetkin, but she had an important duty to perform that was more important for Germany than the aches and pains of getting older. In Moscow, 75 year old Frau Clara Zetkin stirred from her sick bed. A lawfully elected Communist Deputy in the German Reichstag, she had to open the newly elected German Reichstag in Berlin which was scheduled for August 30, 1932.The ambulance arrived and aides carried Frau Zetkin to a Soviet train bound for Berlin about 1,000 miles away. Husky young Communist guards patrolled the train in case German Fascists broke in and tried to harm Grandmother Zetkin.

Grandmother Zetkin’s past history was as colorful as the patchwork summer countryside outside of the train windows. She had been a member of European Socialist and Communist organizations since the late 1800s and early 1900s, focusing on the liberation of women through Marxist reforms of the capitalist system. Clara Zetkin expressed her radical beliefs as editor of Die Gleichheit, the German Social Democratic Party’s women’s journal. She also later served in the German Reichstag from 1920-1933 as a representative of the German Communist Party and as an associate of Vladimir Ilich Lenin in the Soviet Union.

National Socialist German Workers Party leader Adolf Hitler barked orders over his pencil mustache. He decreed that there would be an appropriately noticeable and noisy Nazi demonstration outside the Reichstag, but inside no National Socialist Deputy dare touch one gray hair on Clara Zetkin’s head.

On August 30, 1932, at 3 p.m . while the Nazis yelled taunts and battle cries in front of the Reichstag, Grandmother Zetkin’s aides carried her stretcher in the back door and lifted her to her feet. With a husky Communist Deputy on each side of her, Grandmother Zetkin leaned on a heavy cane and slowly picked her way up the stairs of the Reichstag.

The Oldest Member Calls the Reichstag to Order

As Grandmother Zetkin made her time tortured way up the stairs of the Reichstag, the Communist Deputies cheered her, but others sat in belligerent silence, some pretending to read newspapers or staring into space at visions only they could see.

For the moment, Grandmother Zetkin had the influence and she intended to use it. She mopped her brow and gulped several swallows of water. With trembling hands, she lifted and rang the Speaker’s bell. She spoke in a quavering voice: “It is a rule of this house that its oldest member shall preside at the opening of a new session. I was born July 5, 1857. Is there anyone older?”

Silence, except for the occasional throat clearing and shuffling of feet.

“Then I call this session to order!” Grandmother Zetkin cried. Gathering her strength like a warm, insulating cloak around her shoulders, she started to speak. At times her voice faded. Several times her aides begged her to stop, but she said, “Nein! Nein! I will speak on!”

The ideological clash between Paul von Hindenburg and Clara Zetkin dated back to 1915 when German police arrested Clara Zetkin when as the editor of a Socialist newspaper, – she didn’t become a Communist until l920 – she demanded “Proletarian Peace.” Now Grandmother Zetkin resumed the attack. She charged that President von Hindenburg had grasped power without consulting the Reichstag and that he was the servant of the monopoly capitalists and the Army. She demanded the impeachment of President von Hindenburg for violation of the German Constitution and charged that Chancellor Franz von Papen had failed to solve domestic and foreign problems.

She said, “The best means to overcome the economic crisis is proletarian revolution! I open this Reichstag in fulfillment of my duty as senior member. I hope to live to see the day when, as a senior member, I can open the first worker’s and peasants’ congress of Soviet Germany.

Most of the correspondents present for the opening of the Reichstag reported that “only Communists” cheered Grandmother Zetkin, but Albion Ross of the New York Evening Post had a different perspective. He reported that when Grandmother Zetkin had finished speaking deputies in all of the galleries applauded wildly in a tribute to the physical courage of the old revolutionary instead of for political reasons.
As they led Grandmother Zetkin down to her Deputy’s seat, her two Communist aides shook their fists at the Nazis. The Nazis replied by singing a line from a popular German song: “It Happens only Once!”

Clara Zetkin’s last Reichstag speech underscored the beginning of the Nazi takeover of the German Reichstag. The week of Grandmother Zetkin’s speech, the Reichstag organized itself for business and elected Hermann Wilhelm Goering as permanent Speaker. Although there were only 230 Nazi Deputies, Colonel Goering won the election by a vote of 367 to 216. Goering had won fame during world War I as Commander of Baron von Richthofen’s Flying Squadron, and now he acknowledged his election with military precision, replying with a Nazi salute to the cheers of the Nazi Deputies who jumped from their chairs shouting, “Heil Hitler!”

For the twelve years from 1920 to 1932, the Reichstag’s Speaker had always been Socialist Paul Lobe, so the Nazis had replaced the socialists as Germany’s dominant party. The steps for President Paul von Hindenburg to appoint Adolf Hitler German Chancellor in 1933 had been put into place. Just four months later, Chancellor Adolph Hitler disbanded the Reichstag and decreed that he saw the future of German women as mothers and caretakers for the warriors of the Third Reich.

Her speech in the German Reichstag marked the end of Clara Zetkin’s long and activist career and her last battle against Paul von Hindenburg. She returned to Moscow where she died on June 20, 1933. Nadezhda Krupskaya, Lenin’s widow, and other leading Communists attended her funeral and she was buried in the Kremlin Wall.