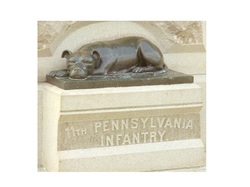 Sallie marched faithfully with her regiment. - Eleventh Pennsylvania Regiment
..."She was buried where she fell, by some of the boys, she ....who so long had shared with them the toilsome march and perils of battle. .." Soldier, Eleventh Regiment

In May 1861, the Eleventh Regiment, Pennsylvania Volunteers enlisted for three months and occupied the fair grounds near West Chester, Pennsylvania. One sunny morning a civilian came to the quarters of First Lieutenant William R. Terry, Company I. The civilian said that he had brought the lieutenant the pup he had promised him. Out of the basket he pulled a little puffy, pug nosed black muzzled dog about four weeks old. She was a brindle bull terrier of a fine breed and could barely toddle on her short and clumsy legs.

Sallie Becomes a Soldier in the Eleventh Pennsylvania Regiment Lieutenant Terry took the puppy into his quarters and made her a nest under his bunk. He fed her, cared for her, and named her Sallie. Sallie rapidly adapted to camp life and thrived. She enjoyed milk and soft bread which came in plentiful supply, and the only work she had to do was eat and sleep snugly rolled up in her bed or loll lazily on a blanket. Everyone in camp loved her and petted and played with her.


The Eleventh Pennsylvania spent the winter of 1862, doing provost-guard duty at Annapolis, Maryland, drilling, performing fatigue duty at the Naval Academy, and guarding the Annapolis Branch Railroad. Sallie took part in all of these duties, since she was a committed member of the regiment by now. She made new friends throughout the entire company.

Sallie Recruits the Colonel's Horse and Marches into Battle

Sallie also learned the soldier’s life. She knew the roll of the drum at reveille, and was usually one of the first out of quarters to regularly attend the morning roll call. At the squad or company drills she patiently followed the particular soldier she had selected until the drill was over. When the regiment formed for battalion drill, she sought out the Colonel’s horse, who soon began to recognize and watch for her. Sallie always led off with the Colonel’s horse when the regiment moved and marched to the front line at the dress parade.

On April 10, 1862, the Eleventh left Annapolis for Washington. From Washington, the regiment marched to Manassas Junction, Falmouth, Aquia Creek, and back again by way of Alexandra to Manassas and Thoroughfare Gap, Front Royal and the Shenandoah. Leaving the Shenandoah, the Eleventh Regiment went to Warrentown and Waterloo and down to the Rapidan River. It fought the battle of Cedar Mountain and then participated in Pope’s Retreat, Rappahannock and Bull Run.

Sallie joined all of this action, faithfully trotting along in the long and hurried marches by night and day. She came under fire for the first time at Cedar Mountain, stuck close by the colors at Bull Run, and fell back with the regiment to Centreville and Chantilly, South Mountain, and Antietam.

During the repulse and falling back of the Eleventh’s line through Gettysburg, she became separated from her regiment. Being unable or unwilling to pass the rebel lines, she returned to the crest of the hill where the Eleventh had fought. Seeking out the dead and wounded, she stayed with them, licking their wounds or patiently watching by their lifeless bodies.

On the morning of July 4, 1863, Captain Cook of the Twelfth Massachusetts and the Provost Guard came to the hill, searching for stragglers and prisoners. They found Sallie, and Captain Cook took her back with him to the brigade and her own regiment. The soldiers of the Eleventh speculated that she had not been captured or killed by the Rebels because she knew a Rebel uniform from the Yankee blue and would have given the Rebels a wide berth.

From Wilderness to Hatcher's Run

Through the Wilderness, during the operations at the Weldon Railroad in 1864, the Hickford raid, and the siege of Petersburg, in November 1864, Sallie stayed with the men of the Eleventh, always in her place at the head of the column. She would announce its departure by barking and jumping at the horse of the officer in command until the line fairly started. Then she quietly trotted along, sometimes at the horse’s heels, sometimes in the rear, or winding through the legs of the men in the middle of the column.

By now Sallie had grown to a medium size, squarely but handsomely built. Her coat was soft and silky, her chest broad and deep. Her head and ears were small and her eyes a bright hazel, full of fire and intelligence. She was active, quick, and had remarkable powers of endurance.

The night before Hatcher’s Run, February 5, 1865, Sallie slept under the tent occupied by four men from Company D of her Eleventh Regiment. At intervals during the night she awoke them with a prolonged and mournful cry. The next day, February 6, 1865, two of the men were killed by Sallie’s side on the field at Hatcher’s Run and the other two were severely wounded. Sallie too, was killed.

In the close of his official report of the battle of Hatcher’s run, the Adjutant General said, “Sallie was killed when the regiment was making its first advance upon the enemy. She was in line with the file closers when shot. We buried her under the enemy’ s fire.”

History of Pennsylvania volunteers, 1861-5; prepared in compliance with acts of the legislature, by Samuel P. Bates.