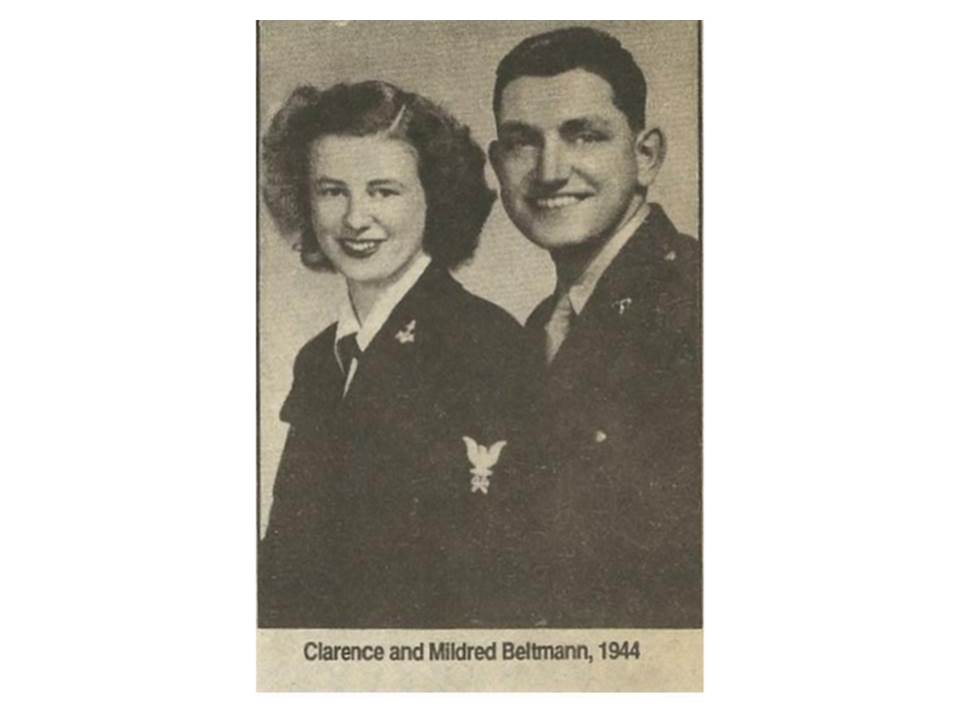 ​​
This interview was one of many I did of World War II veterans. I post this in their honor and in appreciation of the sacrifices of all veterans.)  Kathy Warnes

Clarence and Mildred Beltmann of Hubertus, Wisconsin, were in separate branches of the armed services during World War II, but they managed to persevere through the hard times and to survive Clarence’s five months in four German prisoner of war camps. Back then the Beltmanns were both from Milwaukee and they went together for four years before the war. Clarence enlisted in the army the night before Pearl Harbor and became a mess sergeant after attending cooks and bakers school. He joined the 9th Army at Fort Riley, Kansas, and sailed overseas on the Queen Mary.

After leaving England and France, Clarence ended up on the Siegfried Line during the Battle of the Bulge. The date was December 18, 1944, and the time was about 5 pm in the afternoon. Dusk blanketed the besieged town where Clarence and his company fought a German mortar barrage from inside the few houses that still stood in the village.

Meanwhile back in the United States Mildred was working as a teller at the Marshall & Illsley Bank in Milwaukee, but she wanted to do something for the war effort. In the fall of 1943, she enlisted in the Navy because “it sounded exciting and my mother said I would never do it.”

Mildred didn’t know exactly how long she would be a WAVE, but she counted the days until the war would be over so she and Clarence could be married. She underwent her boot camp training as a specialized store keeper at Hunter College, New York, and she was assigned to the U.S. Naval Receiving Station based in Chicago. Here she did many phases of store keeping in the disbursing office until October 1945.

On January 16, 1944, Clarence’s mother, Mrs. Mable Thoss of Milwaukee received a telegram from the secretary of war informing her that “your son technician fifth grade Clarence W. Beltmann has been reported missing in action since December 20 in Luxembourg.” Another telegram dated April 7, 1945, informed his mother that Clarence was a German prisoner of war. Both his mother and Mildred were happy about this telegram. “When I read that one, I knew there was hope again,” Mildred said.

In his diary which he calls “Notes of Prisoner Life,” Clarence described how his company was taken near Befort, Luxembourg on the Siegfried Line. His company was called to defend a gap between the first and third American armies. He estimated that the Germans outnumbered the Americans 20-1 in this sector and they quickly surrounded his unit. After a night of combat, an explosion from a German bazooka hurled their small group to the floor and flung a few others to the opposite wall. The men checked their condition and they discovered that they were badly shaken and a few of them suffered broken bones from the concussion. Clarence had a dislocated knee and a badly wrenched back.

As the morning progressed and regiment after regiment of Germans marched past the house, Clarence’s unit realized they were witnessing a major offensive. The group voted and decided to surrender because there was no food and water in the house and it seemed improbable that the American Army could rescue them. As Clarence puts it: “Two of the men being married, we decided to surrender instead of resisting. We therefore marched or rather crawled and hobbled downstairs not knowing whether we would be shot or taken prisoner…”

The men were taken prisoner and before this ordeal ended, Clarence would be quartered in four German POW camps or Stalags. One of the things he remembers best is the terrible food and sanitary conditions. “We had coffee, black bread and soup that wasn’t fit to eat,” he wrote. He recalled sleeping on the floor on straw which had been used by prisoners for months. Most of the prisoners had lice and dysentery. Describing long marches to different camps, always just a step ahead of the Russians, Clarence recorded the ups and downs of POW life. He utilized his time by writing his diary, including poetry to Mildred and making a belt of buttons from uniforms of many different armies, including British, French and German.

Eventually the Germans were in a complete rout and the Russians and Americans joined forces at Rostock. Liberation drew nearer for Clarence and his fellow prisoners. During his last days as a POW, Clarence wrote, “Many Americans have been going into Barth souvenir hunting and quite a few have been killed by German snipers or by drunken Russian soldiers who insist on firing their guns to terrorize the populace. I decided to stay close to the Stalag as I had come this far and intended to reach home in one piece.”

On May 13, 1945, in the late afternoon, many airplanes landed and the men boarded them early the next morning to start their trip home. The terse telegram Clarence’s mother received on May 29, 1945, said it all for Clarence and Mildred: “The Secretary of War desires me to inform you that your son, T/5 Beltmannn Clarence W., returned to military control…”

When Clarence finally was scheduled to meet Mildred at the train station in Milwaukee, his train arrived early. Taking advantage of the situation, he sneaked up behind Mildred and grabbed her. “I was just getting ready to punch him when I realized who it was. I hugged him instead,” she said.

Clarence and Mildred were married in July 1945 and are the parents of two sons and five grandchildren. In 1985, they returned to Barth which was then in East Germany, for a reunion of POWs and their wives. The Russians, East Germans, and Americans enjoyed a four hour dinner and Mildred danced with a Russian soldier. When Clarence retired from the Prudential Insurance Company, he and Mildred were involved with Veteran Administration support groups for ex-POWs suffering from flashbacks and health problems. He also did historical recordings of prisoner experiences for the VA library. He said that “to some prisoners, the war is as real as if it happened yesterday. They still can’t talk about it. If I can help them a little, the whole experience I had was worth it.”

One of the poems Clarence Beltmann wrote to Mildred while he was a POW.

When you’re far away from the one you love
Stop and gave at the heavens above
Whether the time be sun scorched noon
Or a frosty night with a glittering moon.
And there above in that realm of space
I see not a sun or moon, but a face
A beautiful face with a tender smile
Which tells me she’s waiting to make life worthwhile.
Perhaps tonight from here windowpane
She’s gazing aloft on her lips my name
As she prays to God way up above
To watch over, keep safe, and return her love.
So when you’re alone and feeling forlorn
Watch into the night and the coming moon
And remember that westward across the blue
She’s watching and waiting the same as you.