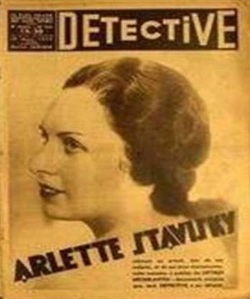 Serge Alexandre Stavisky or “handsome Sasha,” was born in 1888 in Kiev, Ukraine, to Russian Jewish parents. After serving jail time and being involved in several illegal money making activities, Sasha settled in Paris shortly before World War I. In the 1920s, he ran a medical clinic where he promised women an accurate diagnosis of pregnancy, using a bogus examining device that he called a “matrascope.”

Sasha developed extensive contacts among the rich and powerful, and became a wealthy man in his own right. He kept company with some of France’s most glamorous women, until Arlette Simon, a dress model for the house of Chanel, agreed to marry him after he promised her that he would reform. In the 1930s, Sasha managed municipal pawnshops in Bayonne and simultaneously infiltrated French financial circles.

Premier Camille Chautemps, leader of the left wing coalition, approved of the government’s investment in pawnshop securities. Pawnbrokers had been
carefully regulated by the state since the time of King Louis XVI, and a Credit
Municipal, or local council could not organize without the consent of the
Premier. Stavisky sold stacks of worthless bonds and financed his pawnshop with
the surety of what he called “the emeralds of the later Empress of
Germany.”

These emeralds turned out to be glass, but Stavisky and Joseph
Garat the mayor of Bayonne, issued fraudulent bonds in the sum of 239 million
francs.

Charismatic Sasha charmed his way into the lives of people with important
connections. Over a six year period, he paid out over three million dollars in
bribes to French business leaders and politicians and recorded their names in a
ledger listing the monies paid as “stock dividends.”

Then, the carefully constructed facade of his life came crashing down in December 1933, when a court trial loomed and Sasha fled from Bayonne. On January 8, 1934, the police found him dead from a gunshot wound in a Chamonix chalet. Police listed his death as a suicide, but they found a pistol in his left hand and the entry wounds were located above his right temple.

Alexandre Stavisky’s death by suicide-murder sparked more controversy. His
extensive criminal record, the 18 million dollar public price tag for his scams, and the involvement of so many ministers caused premier Camille Chautemps to resign. Premier Chautemps’s right wing opposition charged that he and his police had killed Stavisky to protect the influential people involved in his scams.

Edouard Daladier, from the same Radical-Socialist party as Chautemps replaced him. Premier Daladier almost immediately dismissed the prefect of the Paris police, Jean Chiappe, who was a notorious right wing sympathizer suspected of encouraging anti-government demonstrations.

Daladier’s dismissal of Chiappe precipitated the February 6, 1934, crisis.
For six hours on the night of February 6-7, 1934, about 800 Paris policemen
killed fourteen people as they tried to control the right wing groups
demonstrating on the streets of Paris. This was the first time during the Third
Republic that a government had to resign because of pressure from the streets.

Pressure from the streets also led to creating anti-fascism leagues and to
the agreement between the SFIO socialist party and the communist party, which
in turn led to the 1936 Popular Front. The uprising succeeded in causing
Daladier to resign. His successor, conservative Gaston Doumergue, created a
coalition cabinet which ultimately failed to unite the country.

Stavisky’s Associates and Widow Are Put On Trial

In November 1935, twenty people associated with Stavisky, including his
widow, two Deputies and one general, were brought to trial at the Palace of
Justice in Paris. The prosecution introduced testimony about the murder of
Judge Albert Prince a day before he was to testify, but it went nowhere.

Several times during the trial, Arlette Stavisky was taken from her prison cell
to a private hospital where her foot was bandaged and she was placed in a
hospital bed. Her two children, seven year old Claude and eight year old
Arlette were brought in to see her.

During the trial, Arlette kept repeating, “To be able to go away and
forget all this by migrating with my children to America! To bring up my
children to love me and respect the memory of their father! This is all I
ask!”

Stavisky’s Impact on His Family and On His Country

After eleven weeks, the trial ended with the conviction of just nine of the
twenty original defendants and the acquittal of Arlette Stavisky. The Stavisky
Affair left France internally weakened and deeply divided for the rest of the
decade, and some historians credit it in part for the fall of the Third
Republic in 1940.

The Stavisky Affair didn’t end well for Arlette and her children, either.
Arlette and her children traveled to America in early 1936. A music hall
impresario and a fashion designer hired her, but by October 1936, she and her
children were back in Paris. She sold her jewels and her furs, designed dresses
without a license, and struggled to pay her rent. She survived the difficult
years of the German Occupation, and after the liberation she married a U.S.
officer and lived comfortably with him in Puerto Rico.

Arlette Stavisky Has the Last Word

In 1988 when she was 85 years old, Arlette Stavisky broke her long silence
when she told a reporter for France-Soir, “Understand that my husband
alone was more intelligent than all the journalists of the world put
together.”

Then she resumed her silence.

Paul Jankowski, Stavisky – A Confidence Man in the Republic of Virtue,
(2002)